WW3 Watch: An unexpected intervention from the Vatican

In big news for Catholics around the world, Vatican News reported on Wednesday that the Pope would consecrate Russia and Ukraine to the Immaculate Heart of Mary.

Some subscribers might be confused as to why this should be of relevance to financial investors?

But, as I already noted in my Moscow, the Third Rome piece, if you don’t pay attention to the trends that influence popular belief systems — that in turn influence the psychology of powerful men — you’re unlikely to be ahead on the geopolitics that influence the economic and financial world. There is a reason why Herodotus spent a great deal of time analysing the beliefs of the people involved in the conflicts he wrote about, and the consequences of sacrilegious acts, such as the burning of sacred groves. Such acts had the capacity to influence the fate of nations.

With that out of the way here is some important background to this new emerging Holy War dimension to the Ukraine/Russia conflict.

The consecration news is a direct reference to the prophecies of Mary at Fatima, Portugal, in 1917, which included the handover of three secrets to the children who witnessed Mary’s apparition there. These secrets set out the awful things that would come to pass if Russia was not consecrated to the Immaculate Heart of Mary by a reigning Pope. Mary, however, also reassured the children that if the consecration did happen as requested this would “usher in a period of world peace”.

In the decades following the official confirmation of the related Miracle of the Sun, where the Sun appeared to dance in the sky in front of a large group of witnesses, attempts were made to follow  Mary’s instructions. Many hard-core Fatima believers, however, claimed these attempts didn’t meet Mary’s criteria because of intentionally imprecise wording in the consecrations related to sensitivities surrounding the Cold War. As far as they were concerned Mary’s demand was never met.

But how does this link to Putin?

As already explained in the Third Rome narrative, there is some evidence to suggest Putin has embraced the narrative that he is leading a Holy mission to defend Christianity from certain collapse and corruption. Mostly, of course, because it suits his anti-LGBT agenda. The Third Rome legend nonetheless asserts that Moscow is destined to takeover from the Roman and Byzantine churches as the official representation of god on earth. The narrative fits directly into Putin’s “Russkiy Mir” vision of the Eastern world. It also ties directly into a wider schism under way in the Catholic church, between progressive reformists currently championed by the Pope himself and traditionalists such as Cardinal Vigano — beloved by conspiracy theorists everywhere.

In early March, Vigano, who is very influential among American traditional catholics, is said to have urged a unified Russia and Ukraine to play “an epochal role in the restoration of Christian Civilization, contributing to bringing the world a period of peace from which the Church too will rise again purified and renewed in her Ministers.”

This was a hard reality pill for many of his followers to swallow, because it seemed to suggest he sided with Putin in the conflict.

Nonetheless, the question that needs considering now, is how come the Pope himself is pandering to these superstitions by de facto legitimising the Vigano spin (which in many cases positions the Pope himself as the key corrupted element in the Church)?

It doesn’t make sense to me.

It turns out, however, the consecration announcement may have come in direct response to an official request from the Episcopate of Ukraine on March 2 (Google translation below): 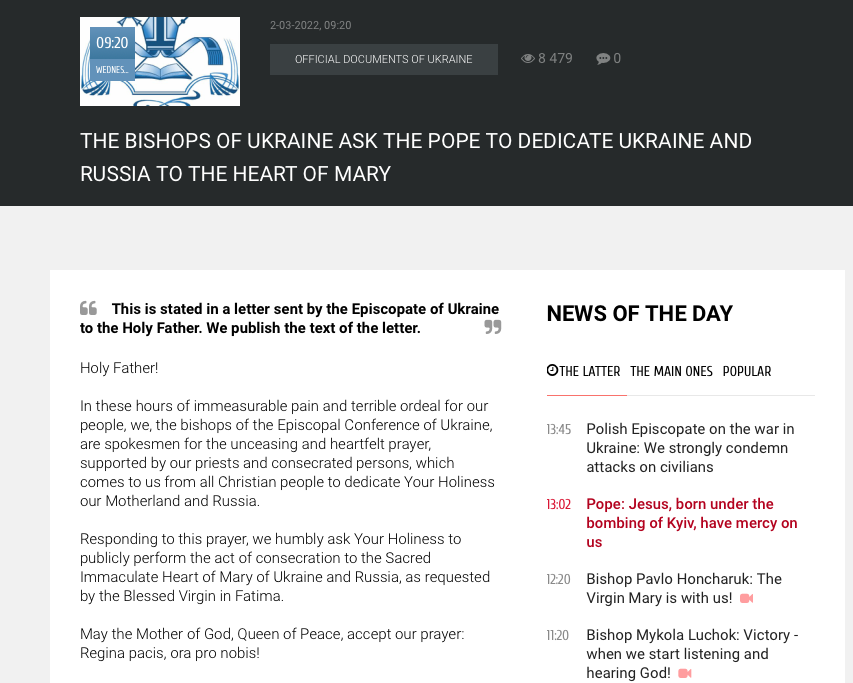 The Vatican has since confirmed the consecration will occur on March 25. In response the Ukrainian episcopate noted:

We are glad that Pope Francis will give Russia and Ukraine to the Immaculate Heart of Mary on March 25 this year. in St. Peter’s Basilica in the Vatican, while Cardinal Konrad Krajewski will do the same in Fatima at the same time.

In 1917, Our Lady of Fatima said that in order to avoid war, famine and persecution of the Church and the Holy Father, one should ask for Russia’s consecration to Her Immaculate Heart and the sacrifice of Holy Communion with a view to rewarding the first Saturdays of the month. If its aspirations are met, Russia will be converted and peace will prevail.

We want to prepare for this New Year’s event in Ukraine, which will begin on March 17.

We hope that this Act of Consecration will bring an end to the war as soon as possible.

What are the implications of this move for geopolitics? Well, they seem pretty binary to me. If the consecration happens but peace does not prevail, millions of Catholics could lose hope in the prophecies of Fatima — which could in turn see them question their faith. If peace does prevail, it will prove the prophecies right, but it might also inadvertently empower the Third Rome narrative and Putin.

As far as The Blind Spot is concerned, it’s a worthwhile development to track because of how highly charged belief systems are getting in the area.

Rise of the countercrypto influencers

Gosplan watch: Why “targeted price controls” are rationing in everything but name